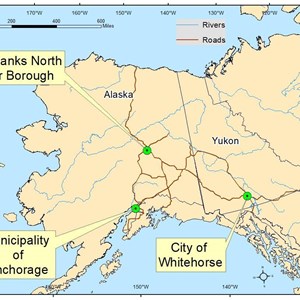 Anchorage (Longitude: -149.8948, Latitude: 61.2163), Alaska’s largest city, is in the south-central part of the state nestled between mountains and the ocean. Leading up to the mountains in the east is the Chugach State Park which is one of the largest state parks in the United States (495,00 acres). Anchorage is home to over 40% of residents in Alaska with a population of 295,365 residents in 2018. The population in Anchorage has grown rapidly since 1980 with nearly 120,000 more residents. Within Anchorage is the Joint Base Elmendorf-Richardson military base with over 33,000 military personnel and family members. The climate is heavily influence by the maritime environment with cool summers (ave. high 64°F, ave. low 50°F) and mild winters (ave. high 25°F, ave. low 17°F) for the latitude. Anchorage on average receives more rain (42 cm) than snow (188cm).

Fairbanks (Longitude: -147.7336, Latitude: 64.8357), the largest city in interior Alaska, and the borough seat for the Fairbanks North Star Borough. The city of Fairbanks proper has 31,668 residents, but the surrounding metro area pushes the population size to slightly over 100,000 residents. The downtown is nestled within a bowl surrounded by the boreal forest. This topography can give rise to strong temperature inversions during the winter resulting in temperatures nearly 20°F warmer in the hillside than in downtown. Fairbanks proper has grown at a lower rate than Anchorage adding 9,023 residents since 1980. The climate experiences large extremes with short, hot summers (ave. high 73°F, ave. low 50°F) and cold winters (ave. high 5°F, ave. low -17°F). Precipitation during the summer is scant with only an average of 28 cm annually as rain and 165 cm as snowfall.

Whitehorse (Longitude: -135.05694, Latitude: 60.72111) is in the southern portion of Yukon and the capital. It is the largest city in the Yukon and is home to nearly 70% of residents in the province with a population of 25,085 in 2016. The community is at the base of mountains and like Fairbanks is within a slight bowl. The community is surrounded by boreal forest with lodgepole pine. Whitehorse proper has added 10,271 residents since 1981. The climate experiences large extremes with short, hot summers (ave. high 69°F, ave. low 45°F) and cold winters (ave. high -7°F, ave. low -18°F). Annually Whitehorse receives a small amount of rainfall (16 cm) and more snowfall (145 cm).