We would dearly want to know when and where in the Fairbanks area a wildfire will occur in the near future, but (as in the Aymara worldview) those events are yet “behind” us and thus not observable.   We do, fortunately, have observed data “in front” of us: the Alaska Fire Service has been mapping fire scars for decades, and that data has been reliably complete in the Fairbanks North Star Borough (FNSB) since mid-1970’s. 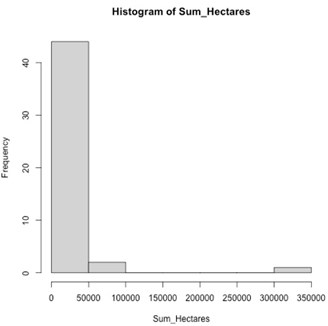 With log base 2, every unit on the x-axis is a doubling in the total area that got burned.  On the linear scale, the 338 thousand hectares burned in the year 2004 is clearly far more than the next-highest observation (57 thousand hectares burned in 2002).  However, 338 is approximately two-and-a-half doublings away from 57, so on a logarithmic scale the year with extreme fires is not that unusual. 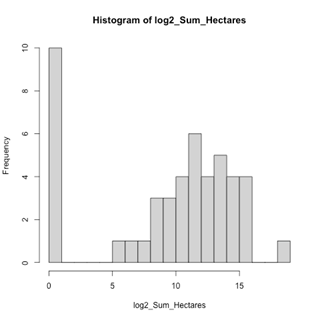 The scatter plot shows the total area burned for each year over the past half-century.  We can do sophisticated statistical analyses to check if there is some trend in the data, but even without it we can observe that there isn’t a clear change in the total area burned over the years.  If we want to guess what will happen in the future, we can make a reasonable assumption that this lack of pattern will continue for the next few decades. 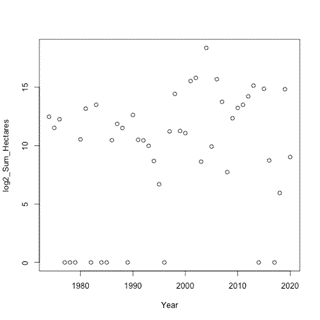 Assumption 1: In the next few decades, the total area burned will remain without an overall pattern [1] from one year to the next.

We also consider another way that the total area of fire scars in one year may depend on the total area of fire scars in the previous years.  If an acre of the forest burned last year, there wouldn’t be much flammable material this year to catch and sustain a fire.  However, FNSB is big enough that it’s unlikely that the same patch of land would see a wildfire attempt (though there are a few places where human-caused ignitions make a regular occurrence).  That’s why we don’t see a clear pattern of dependence from one year to the next in the scatter plot [2].

We made two more assumptions:

Assumption 4: Within a single decade, only a very small area in FNSB burns repeatedly.

Armed with these four assumptions, we can estimate probability of what may happen in the near future.

How likely is the next decade to get a year with a very large area burned, like the one that happened in 2004?  With our assumptions, the probability [3] of getting at least one such year in a decade is 19.1%. 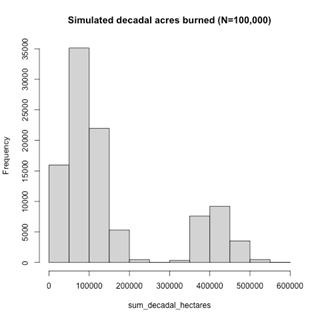 Though we expect a year like 2004 to have an outsized impact, it’s also possible for years like 2002 to add up to a lot of area burned.  To get a better sense of what may happen in a decade, we have generated the distribution of the total area burned within a decade in the FNSB area (as opposed to one year).

This distribution is bimodal: there is a 21.2% chance that the coming decade will have more than three hundred thousand hectares burned.

Any one of our four assumptions could turn out to not hold.  But aside from that, we should be cautious about concluding the upper bound on our estimate of area burned in a decade.

In our model of hectares burned in a decade, the highest area burned is under six hundred thousand hectares.  That bound relies on the historical area burned in the year 2004 and represents the small chance that a decade will have two such extreme-fire years.  But the year 2004 may not be representative of extreme-fire years around Fairbanks: maybe other such years are even more extreme; maybe they are less so.

So, like the Aymara, we proceed “back” into the future with caution.

[2] To be sure, we did a statistical test called Durbin-Watson.

[3] It’s one minus the probability that none of the ten years in the decade get such a high burn:

Peering into the future by looking to the past

The Aymara people of South America conceptualize the past as the visible in front of them, and the future as the unobservable behind them [1]:

The Aymara … indicated space behind themselves when speaking of the future – by thumbing or waving over their shoulders – and indicated space in front of themselves when speaking of the past – by sweeping forward with their hands and arms, close to their bodies for now or the near past and farther out, to the full extent of the arm, for ancient times.

Read the story by Anna Varvak on the challenges to predicting wildfire activity in Alaska and her approach.